Built for Malcolm Hamilton and completed in 1618, it has a Scottish look about it, with corner turrets at one narrow end of a rectangular four-storey building and with two massive full-height round towers having angular tops guarding the entrance at the other end. This imposing structure stood in one corner of a walled bawn with rounded corner towers, one of which subsequently served as a dovecote. The castle fell briefly into Irish hands in 1641, and was held by Gustavus Hamilton, governor of Enniskillen in 1688. It appears to have been burned in the 18th century and was abandoned. 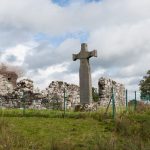