Inishmacsaint Island is accessible by land or by water. There are the ruins of an ancient church and graveyard and a magnificent ancient high Cross. The island is associated with Saint Ninnid. Churches and monasteries were being built in Fermanagh from at least the 6th century. Now these islands seem remote, but in Early Christian times the Erne was a great highway, providing a route from the sea near Ballyshannon deep inland to Leitrim and beyond, the island monasteries being ports of call on this waterway. 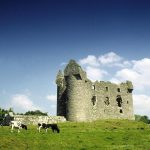 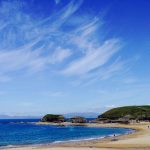